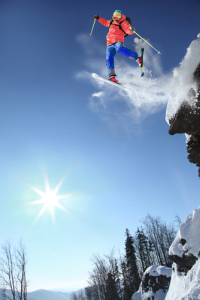 Most people don’t like to fail, and if you personalize failure – such as failing at a new business, job or marriage – it’s really easy to misinterpret that failure as meaning, “I’m a failure” or “I’m a loser.”

When you work at something that’s important to you and it doesn’t work out, it’s a setback.

Embracing setbacks does not make you a failure. It’s a critical framework to gaining control of fear of failure. If you mistakenly believe you’re a failure when things don’t work out as planned, then you will experience an overwhelming degree of fear when facing the risk of failure.

Let’s go through this exercise, to help you determine your courage in risking failure.

Exercise: Making it to the top

Because each person’s barometer is different, below is a question-and-answer self-analysis of your view of success.

Bill Gates, in the book, “Great by Choice,” by Jim Collins and Morten T. Hansen, describes how hyper-vigilant he was about what could hit and damage Microsoft. “Fear should guide you,” he said in 1994. “I consider failure on a regular basis.”

When your company is the leader in its space, perhaps even one of the largest companies in the world, countless other companies, individuals and circumstances could bring you down. Gates understood this and looked potential failure in the face every day, and used what he learned to avoid failing. This is maybe the ultimate mastery of fear of failure.

Productive paranoia is the ability to be hyper-vigilant about potentially bad events that can hit your company, and then turn that fear into preparation and clearheaded action. You can’t sit around being fearful; you must act.

This can apply to many types of fear of failure. What if you were afraid of losing your job, or afraid your spouse was going to divorce you? Is it better to look the threat in the eye, understand why it could happen and go into action to mitigate the cause? Consider this: What do you need to do to perform better at work? How could you improve your relationship with your spouse?

Fear is a form of energy. Fearless Leaders use the energy of fear to go into productive action. And they learn how to live being uncomfortable – never taking for granted their success.

We’ll begin exploring that in our next blog. Thanks for being with us!