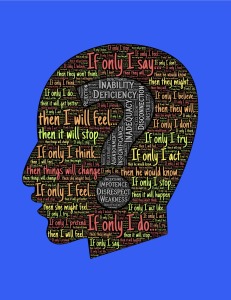 Let me tell you now my co-author’s story and how he moved forward.

When TC North was 27 and working for Dr. Robert Swearingen as the exercise physiologist at a wellness clinic, Dr. Swearingen one day asked him if he’d like to run an aerobic exercise presentation for a few people at a local running store.

TC was quite shy, as well as dyslexic – he was the kid in grade school who didn’t raise his hand for fear of being wrong. So his response was, “No! I don’t do public speaking. I’m shy and introverted.”

What happened next, though, changed his life forever. The towering Dr. Swearingen told him, in a loud and authoritative voice, “Sit down.”

With some trepidation, he sat.

“I’m going to give you a piece of advice and I want you to take it,” Dr. Swearingen said. “My advice, if you want to be your best, is that you must learn to speak and write professionally and become good at them both. So accept this speaking engagement and accept every other speaking engagement that is ever offered to you and then create some more.”

At this point the voice in TC’s head was screaming, “No! NO! Don’t do it! Run!” He glanced at the door and began planning his exist. At the same time, another voice, a tiny quiet one – TC’s intuitive voice – told him that the doctor was correct.

TC did accept that speaking engagement. It took all his courage to show up to give his presentation, but he did. Here’s what happened . . .

TC had written his presentation on a pad of paper. His legs were shaking so badly from his fear that he sat. Before that enormous audience of six people he read his entire presentation, word for word, off that pad of paper. You can imagine how well that went over.

Why? Because he hadn’t died. Leading up to the presentation, his irrational fear was that if he did a speaking engagement he’d die. Fear of death is, of course, the ultimate fear of failure.

TC told me that this was a defining moment in his life. He now exercises his passion to speak and to write, and uses both of these tools to empower people and to build leaders.

Like me, TC has spent a lifetime learning to be courageous and bouncing back from more setbacks than he can even recall. It’s a never-ending journey for him to become stronger and, by extension, to become a more effective Fearless Leader.

What do you think? What setbacks in your life have made you stronger? I’d love to know.