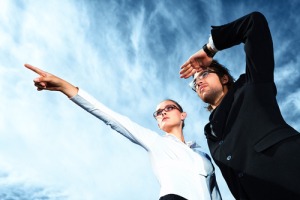 Let me talk to you about a particular moment in my life when I needed to be courageous, fearless and a leader.

By all outward indications, my life was a success. I had a lucrative career as an executive at a global firm. I was living in an eight-bedroom house on a very large estate with a wonderful maintenance team to help with the upkeep. My then-husband was an executive at a large financial institution in New York. I had a beautiful, healthy daughter whom I adored. No one would have looked at me and thought I had a care in the world.

Then one day I hit the wall of life.

Although everything looked perfect from the outside, the reality was far from ideal. I was forced to go through a very difficult divorce and wound up paying a large settlement. Both of my parents later died in my arms, one passing away on Father’s Day and the other on Mother’s Day. But it wasn’t until I was diagnosed with two potentially terminal illnesses that I suddenly woke up and realized that something was not right with my life.

As a working mother, however, I didn’t have the option of checking out when things felt overwhelmingly impossible. I still had to function. I needed to get up and out of bed each day so that I could pay the bills and care for my daughter. Even though you might have thought I was doing fine, if you peeled the layers of my self-denial, you’d have been shocked at the grief and loss I was carrying deep within me.

Eventually, my profound unhappiness began to ravage me physically, finding its way into my lymph nodes, my reproductive organs, and almost destroying my immune system. Sometimes it got so bad that my entire body would go numb. It became abundantly clear that just focusing on the business of day-to-day survival was not enough to sustain a life. It was literally killing me.

I realized then that my happiness needed to come first, or not only would there be no job to support us, there’d be no one to take care of my young daughter. Just as flight attendants before a takeoff tell parents that in the event of an emergency they need to put their oxygen masks on first before they can save their children, I needed to put on my “oxygen mask” in order to save my daughter.

Fortunately, around that time, my firm was going through an IPO and my bosses came to me with great love and affection and said, “You know, you don’t have to do this anymore if you don’t want to.”

It was that obvious just how miserable I had become.

So, despite everything I had ever been told about having a back-up plan in place when leaving a job, I took a yearlong break with no safety net.

It was terrifying and exhilarating all at the same time. But that decision to gamble on myself led me on a journey to finding my life’s work, that of opening the door for both men and women to find true happiness at work and at home.

As for me, I was able to take all of my former pain and suffering and turn it around as a learning device for other people going through similar detours in life.

Knowing that I’ve been able to use my own difficult experiences to the benefit of others has been a great reward in life, second only to raising my beautiful daughter Elisabeth Oriana.

Have you been through a similar experience, where you’ve had to find the strength to step back and regroup? I’d love to hear about it. Thanks for sharing.