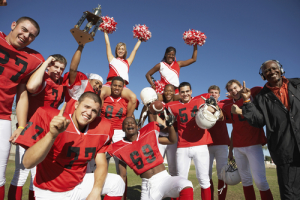 Research shows that the development of mindfulness decreases the release of cortisol, which is often referred to as the stress hormone. Lower levels of cortisol are associated with feelings of relaxation, contentment and inner peace. Mindfulness allows us to essentially be happier and healthier people. Let’s look at how you benefit as a leader as you become more mindful.

Take the example of a soccer coach we’ve worked with. His team was in a horrible slump and he asked us, “We have two weeks to turn this team around to have a shot at the playoffs. What can you do?”

Our initial thought was probably nothing – not in two weeks. Anyone who’s worked with a professional sports team knows it’s difficult to turn a slumping team around in just a few hours of an intervention by an outsider. But the challenge was intriguing, so we told the coach, “I don’t know if we can do anything, but we’ll spend some time with your players and staff to see what we might do.”

We soon discovered that although there was a good sense of camaraderie among the players, there was also a palpable, collective negativity just below the surface. During practice, the head coach criticized the players, but didn’t teach them how to correct their mistakes.

So we asked the players what they thought of the coach’s style. They didn’t trust us, so they didn’t have much to say about their coach when we asked.

Nothing in my experience would work within the time frame we had. This was one of those moments where, in order to possibly find a creative solution, we needed to sit in our mindful moment for some time with the following questions:

We had seven days now to identify and remedy what was causing this team to be in a slump.

In a flash of creativity, which in this case seemed like a euphemism for desperation, a possible solution emerged. What if:

In the very next practice, there was a demonstrable difference in the positive energy and physical effort of the team. From that day on, the team had great practices and played better in games than they had all season. The two-week turnaround was a success. They made the playoffs!

Our most profound challenges, even the ones that seem impossible, are often answered by being still in the mindful moment.