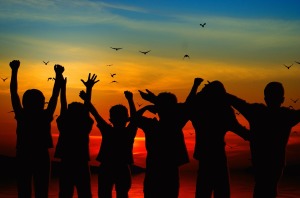 What do you do when faced with an impossible task?

Jerry Sternin found out. He studied positive deviants, and in an impossible time frame, with essentially no money, and using a radical approach, he figured out how to save starving children in Vietnam.

Jerry and Monique Sternin were on staff with Save the Children, which the Vietnamese government asked to help fight malnutrition throughout. The government gave the Sternins six months to make a difference.

Solving malnutrition for a whole country in six months with few resources was an apparently impossible task.

But the Sternins were mindful and thought beyond convention for a solution. They had to address a variety of issues:

The Sternins turned to the theory of amplifying positive deviance. A positive deviant is an individual (or group) who is uncommonly successful compared with his peers using the same resources in facing the same challenge as others.

When Jerry and Monique Sternin arrived in Vietnam, they adopted a beginner’s mind. A mindful approach. They assumed they didn’t have the answer and needed to listen, not talk.

They learned that conventional Vietnamese wisdom held that certain foods were considered low-class, or common food, even though these foods were high in nutritional value. Generally, mothers didn’t actively encourage eating. Some believed that it was not wise to feed children with diarrhea.

The Sternins also discovered that most people were too busy working to take time to feed their children and so they simply left food out to be eaten. The children might eat it or not. Other parents only fed their children once or twice a day. The positive deviants, however, fed their children small amounts of food many times a day.

The positive deviants did the following:

So the positive-deviant mothers were providing a meal that had carbohydrate (rice), protein (crabs and shrimp), and vitamins (sweet potato greens).

The next step was to make sure the practices of the positive deviants would spread, without the Sternins’ involvement. In Vietnam, for example, a health volunteer would invite eight to 10 mothers into her home for medicinal-food training. As a price of entry, the mothers were required to bring a contribution of shrimp, crabs and sweet-potato greens. The volunteers and the mothers would then use those ingredients, along with rice, to cook a meal for the entire group. After two weeks of this, the training was over.

In six months, they had succeeded. And over a two-year period, malnutrition dropped by 65% to 85% throughout the villages. The Harvard School of Public Health came to the four original villages where the Sternins worked and did an independent study, finding that children who hadn’t even been born when the Sternins left the villages were at the exact same enhanced nutritional levels as the ones who benefited from the program when we were there. “That means that the behavior sticks,” the Sternins said.
Jerry Sternin took his positive-deviance program to a total of 14 Vietnamese villages after succeeding in the initial four villages. As the program grew, it uncovered new food solutions in new localities – sesame seeds, peanuts or snails. Different solutions grew out of different soils. But the process remained the same: Discover original local answers to the problem, and then give everyone access to the secrets.

The groundbreaking work that he did in Vietnam has served as a model for rehabilitating tens of thousands of children in 20 countries.

Do you know of positive deviants where you work or in your life? I’d love to know. Thanks for sharing.