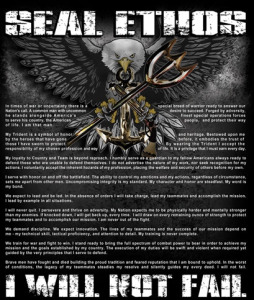 Here is the Navy SEALS ethos:

In times of war or uncertainty there is a special breed of warrior ready to answer our nation’s call. A common man with uncommon desire to succeed. Forged by adversity, he stands alongside America’s finest special operations forces to serve his country, the American people, and protect their way of life. I am that man.

My Trident is a symbol of honor and heritage. Bestowed upon me by the heroes that have gone before, it embodies the trust of those I have sworn to protect. By wearing the Trident I accept the responsibility of my chosen profession and way of life. It is a privilege that I must earn every day. My loyalty to Country and Team is beyond reproach. I humbly serve as a guardian to my fellow Americans always ready to defend those who are unable to defend themselves. I do not advertise the nature of my work, nor seek recognition for my actions. I voluntarily accept the inherent hazards of my profession, placing the welfare and security of others before my own. I serve with honor on and off the battlefield. The ability to control my emotions and my actions, regardless of circumstance, sets me apart from other men. Uncompromising integrity is my standard. My character and honor are steadfast. My word is my bond.

We expect to lead and be led. In the absence of orders I will take charge, lead my teammates and accomplish the mission. I lead by example in all situations. I will never quit. I persevere and thrive on adversity. My Nation expects me to be physically harder and mentally stronger than my enemies. If knocked down, I will get back up, every time. I will draw on every remaining ounce of strength to protect my teammates and to accomplish our mission. I am never out of the fight.

We demand discipline. We expect innovation. The lives of my teammates and the success of our mission depend on me – my technical skill, tactical proficiency, and attention to detail. My training is never complete. We train for war and fight to win. I stand ready to bring the full spectrum of combat power to bear in order to achieve my mission and the goals established by my country. The execution of my duties will be swift and violent when required yet guided by the very principles that I serve to defend. Brave men have fought and died building the proud tradition and feared reputation that I am bound to uphold. In the worst of conditions, the legacy of my teammates steadies my resolve and silently guides my every deed. I will not fail.

Once you complete the Navy Basic Underwater Demolition School (BUDs), you can almost be guaranteed a successful outcome within the SEAL community – so why do so many people try to get in, with so few actually making it?

It’s not simply a matter of strength or size. It’s heart, resilience and mental conditioning.

Recent events have put these professionals on the front page and at the center of attention in the news, media and film, which is actually counter to their strong warrior ethos of being quiet professionals.

A Navy SEAL Trident with its eagle and pitchfork or the SWCC speedboat and wings is always worn above all other medals to signify this ethos.

To be awarded any Spec Ops insignia by these working warriors is an honor few will know and a privilege of the highest magnitude. As with Delta Force and other special operations forces, being a Spec Ops means more than words can say. The insignias for these forces are the mark of a consummate warrior professional. You’re part of a relatively small community – whose stamina and endurance mentally, emotionally as well as physically – exceeds most – highlighting a rare human trait indeed.

While women significantly contribute to these communities, they are usually in critical support roles such as infrastructure, telecommunications and intel, rather than in roles that put them in the direct line of fire. This sacred space will soon be tested with new rules for women in the armed service allowing for front-line roles in the consciousness of an evolving community.

Endurance and sacrifice are key.

In my next blog, I will speak about how Fearless Leaders who are not in Special Ops can profit from aspects of the SEAL ethos.