Look at that question in the headline again. Do you? 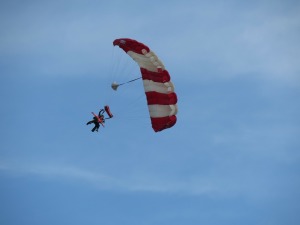 You’re not alone. We can’t even count the number of highly successful executives, entrepreneurs and sales professionals who’ve told us, “I feel like a fraud,” or something similar. And all these talented people had a secret fear.

Just like one very powerful businessman, whom we’ll call Dan:

Dan was a tremendously successful and powerful man in his city. Speaking to groups was important to his success. He used to enjoy speaking, but was becoming increasingly terrified of it.

He’d dropped out of school in eighth grade, worked for and received a GED and never attended college. Now he was in business dealing with Harvard MBAs and some of the most brilliant business minds in the country.

What if they found out he was an eighth-grade dropout?

To overcome this fear, Dan decided on two courses of action.

First, Dan completely reframed his fear from having a negative charge (fear) to a positive charge (excitement). Here’s how he did it: He was an adrenaline junkie who loved to rock climb, parachute, and paraglide.

I sat with Dan and asked him if public speaking scared the crap out of him. I was glad when he answered yes. I then posed this question to him: “What if you thought about public speaking as the most amazing, exciting adrenalin rush you’ve ever had, bigger than rock climbing, or jumping out of the plane?”

After contemplating this reframed thought, he said, “When I think about it like that — it’s the greatest rush I could ever imagine! I want that drug!”

And with that, he adopted this new way of thinking about public speaking: What a rush!

For his second course of action, Dan decided to reveal his life story in the business section of his city’s paper, a story about an incredibly brave, tough, intelligent kid who had survived at a young age on the streets of a ghetto where many end up dead. The kid became a highly ranked karate fighter and an articulate, voracious reader, educating himself through amazing desire and self-discipline. This young man eventually built several successful businesses and was a master at putting together multimillion-dollar sponsorship deals with some of the most financially savvy business people in the country.

Dan’s published story created admiration for him throughout the business community. Dan no longer had any secrets. He exposed everything in his story, and by doing so, he freed himself of the fear. His colleagues were amazed that he could be such an intelligent, savvy businessman without a college education.

About a year later, Dan was interviewed on Nightline speaking to millions of people, on TV. It was amazing! Dan was successful because he stayed with and learned how to resolve his discomfort.

How about you? What’s your secret fear of being found out as a fraud that you believe you can overcome by being transparent? Thanks for sharing!