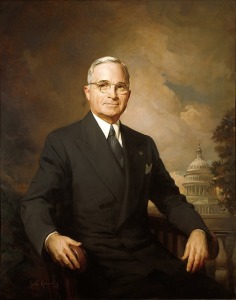 The author Napoleon Hill  studied over 25,000 people who had experienced failure and concluded that lack of decision-making was one of the top causes of failure. When you have an important decision to make, should you make a rational logical decision; should you follow your heart, your emotions or should you make an intuitive decision?

Great leaders, such as Harry Truman, the 33rd president of the United States, made decisions that affected the lives of innumerable people – such as that to drop atom bombs on Hiroshima and Nagasaki to end World War II.
Harry Truman had a well-defined three-step decision-making process:

3. The intuitive decision. You need to get away from thinking consciously about your decision. You need to allow your subconscious mind an opportunity to pull all the information together at a level below your consciousness, then pay attention to your intuition. You may find your intuitive message in the pit of your stomach, as Harry Truman did, or from a quiet sense of knowing. Truman followed his intuitive decision without question as long as he went through the three steps.

Notice that the third step of Harry Truman’s decision-making process was living in the mindful moment. The logical decision examines past and future. The emotional decision is based on an attachment to an experience also based on the past and the future. The mindful moment is the integration of all the logical and emotional information and experiences in a way we can’t even fully logically express.

There’s a difference between problem-solving and creating a new vision. We are taught to problem solve, not to create. In the Mindful moment, you can do either.

Our most profound challenges, even the ones that seem impossible, are often answered by being still in the mindful moment.  In an interview with the organizational consultant and author Warren Bennis, we discussed the power of higher consciousness and the impact that practicing mindfulness creates.

Bennis is widely regarded as a pioneer of the contemporary field of leadership studies ad has said that if there was ever a time for leaders, it is now. But what makes a leader? In previous writings, Bennis questioned, like most of us, why certain people seem to naturally inspire confidence and loyalty, while others hesitate and stagger.

While there may not be a certain answer, most agree that it has something to do with how people deal with misfortune and hardship. True leadership comes from one’s ability to make meaning out of adversity and negative circumstance. A fearless leader meets a challenge and has mastered the skill to conquer difficulty and come out stronger and more dedicated.
Whom do you regard as a fearless leader, someone who has made meaning out of adversity? Thanks for sharing.