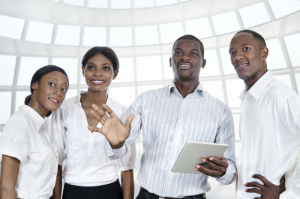 We’ve been exploring motivation, as it relates to business and especially to fearless leaders. How can you apply the motivation concepts with the people who report to you or who you surround yourself with?

You’ll remember I mentioned the famous “Illusion of Control” experiment in which lottery numbers (in a test study) often sold back their “winning” tickets for five times the price paid (or the price they assigned to the winnings). When we choose for ourselves, our commitment to the outcome of that choice is five times stronger.

Consider another practical example: One retail bank’s Personal Financial Services CEO employed a fairly literal interpretation of the “illusion of control” findings when he wrote out his change story in a way that he found meaningful.
He then shared it with his team, getting feedback on what resonated with its members and what needed further clarification. Then, he asked each of his team members to “write their own lottery ticket.”

What was the change story for them, in their business, that supported the bigger personal financial services change story? This CEO’s team members wrote their own change stories, again in full prose, and shared it with their teams. Their teams gave feedback and then wrote their own story for their area/department, and so the process continued all the way to the frontline. It took twice as long as the traditional road show approach, but for a fivefold return on commitment to the program, it was the right investment to make.

Sam Palmisano, former CEO of IBM, in spearheading a change effort to move IBM toward a values-based management system, enabled thousands of employees to “write their own lottery ticket” regarding IBM’s values. During a three-day, online discussion forum (dubbed ValuesJam), more than 50,000 employees were empowered — literally — to rewrite IBM’s century-old values.
Other applications need not be so literal.

At a global consumer goods company, the CEO brought together his top 300 for three two-day “real work” sessions over the course of three months, where they created the story together. Again, this required a significant investment of time, but having the top 300 (five times more committed to the way forward) was considered well worth the investment.
The story was then rolled out across the organization via one- or two-day sessions in which small working groups explored the implications for their particular parts of the business.

When working with a large global pharmaceutical organization, I did something very similar. We had two groups, two directors and then a larger group of senior executives. We brought them together to share their success stories and to learn from each others regional experiences. Those success stories and regional experiences were then shared throughout the organization. As a result, the organization and the senior executive team became more aligned and committed to the contributions that each region was making to the overall global success of the company.

What would your change story be?