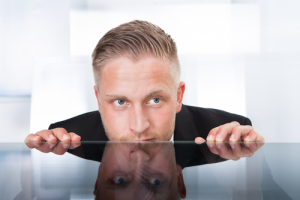 Let’s look at how people – you included – might block success.

We once met a realtor named Joyce, who’d been working in real estate for 10 years and was a middle-of-the-pack producer. Joyce had long felt that something was holding her back, but she couldn’t quite identify what it was.

We discovered, after spending some time with Joyce, that she had a limiting belief that formed when she was a child. Joyce had grown up on a farm where she’d been taught that no matter what she or her family did during difficult times, it was God’s will. If there was a drought, they couldn’t squeeze a raindrop out of a cloud. If their fields were flooding, they couldn’t separate the clouds so the sun would shine.

Joyce truly felt that it didn’t matter what she did because she had no effect on the outcome.

Through coaching, Joyce came to realize that her marketing was actually helping her sales and, while she couldn’t make it rain, she actually could have an effect on her sales outcome. She has therefore continued to use marketing, which has increased her sales tenfold.

The only thing that had changed was her mindset. She realized that she could, in fact, make a difference.

Here’s an exercise that might help you find your limiting beliefs.

Recognizing How You Block Your Success (Your Blocking Behaviors)

For your top “dos” and “don’t dos,” ask yourself, “What fears come up in my mind when I imagine myself doing the exact opposite?”

For example, if you end a relationship, will you be lonely for the rest of your life? If you fire a useless employee, will everyone in the company hate you? If you get the latest technology, will you know how to operate it or will it crash on the first day?

If you know you are capable of much more and yet you keep hitting a glass wall, you can be pretty sure you have conflicting goals between your conscious and subconscious minds.

If you can determine what your subconscious limiting belief is, you can resolve the conflict by looking at that belief consciously and rationally and free yourself for optimum success.

Before we move onto the next post – on what we call “mindset maniacs” – tell me what was your own worst-case scenario, and how did you come to realize that you could see it for what it was, a scenario rather than a reality?