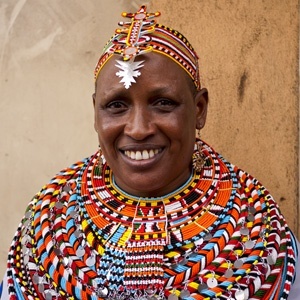 Battling longstanding cultural traditions, ones that are harmful despite their being embedded in people’s way of living in a society, takes courage – the courage of a fearless leader.

A fearless leader such as Rebecca Lolosoli, who lives in Kenya and is part of the Samburu people. In her culture, women are considered possessions. They can be bought and sold for less money than a person there would pay for a cow.

“A husband is expected to beat his wife so that [she doesn’t] ‘grow horns,’” Lolosli said. This really means that a man tries to make sure a woman doesn’t think and act independently. “A husband may even kill his wife without being punished,” Lolosoli said.

Lolosoli all her life intervened when a woman was being beaten – even when she was a young girl – and she herself was often beaten for interfering in the Samburu custom. Lolosoli often stood up before the village elders, asking that they put an end to the violent customs against women and provide protection to those who had endured domestic abuse and rape. For her bravery, Lolosoli was the victim of horrifically cruel punishments, including rape, beatings and genital mutilation – the result of which is that she can never experience sexual pleasure. But Lolosoli was always fearless and all her life has refused to be silenced.

As an adult, Lolosoli received death threats from her husband and the men in the area because she spoke out against abuse of women. Once, her husband’s brothers beat her so badly that she was blinded for nearly two months. But as soon as she recovered, Lolosoli continued fighting for the empowerment of women in Kenya by forming a new village, a safe haven for women fleeing violence or persecution. They named it Umoja, which means unity.

Lolosoli continually demonstrates the courage to fail or, in her situation, even worse: the courage to risk rape, physical beatings and death in order to succeed in changing the culture of not only the Samburu tribe, but all of Kenya to support the empowerment of women, to value them more and to end the practice of genital mutilation.

Lolosoli is a remarkable case of someone who was not afraid to die in order to lead, and to change what she knew was a horrific situation. Have you heard of other fearless leaders like her? I’d love to hear about them. Thanks for sharing.