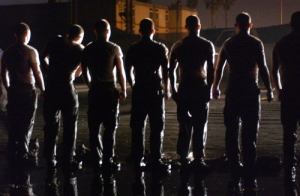 I’d promised a few stories of Fearless Leaders who embody the principles we’ve been exploring in this series of blogs. Here is one.

In a story, written by Barton Gellman, titled “Person of the Year 2011,” for Time magazine, Admiral William McRaven is rightfully honored: “McRaven, then a 45-year-old Navy SEAL captain, led a jump exercise near San Diego. The commandos dropped into 10,000 feet of free fall, reserving their parachutes for the last moment. As they neared the release point, and of the men below, McRaven drifted directly underneath.”

It was only seconds later that his canopy slammed into McRaven at well over 100 mph, throwing him into a violent spin. “Frankly, I wasn’t sure whether I had been knocked unconscious, so when I had the chance, I pulled my rip cord,” McRaven told TIME. “Part of the chute wrapped around one leg, the risers around the other, and the good news is that it opened. The bad news is that when it opened, it split me like a nutcracker…”

Then eight weeks later, on September 11, the world got notice of New York being attacked. Those exercises had McRaven and his four SEAL teams trained for a moment just like this. Naval Special Warfare Group 1 began the search for Osama bin Laden. But, it was not with commodore McRaven, who was too injured to join them. What seems like an end to this story is in fact, just the beginning.

In 2011, a decade after the attacks, McRaven had recovered and resumed his ranks. Bin Laden and McRaven would cross paths again.

Now, a three-star admiral atop the Join Special Operations Command (JSOC), McRaven, along with his counterparts, took on the plan to “finish options” for Bin Laden. It was May 1 when McRaven commanded, with President Obama’s approval, the helicopter assault against the al-Qaeda leader’s redoubt in Abbottabad, Pakistan.

Others remember McRaven as calm as can be as he reported happenings in real time to the President. Even when the lead helicopter crash-landed and those on the video call wanted to vomit, McRaven simply said with no expression, “As you see, we have a helicopter down.”

Gellman describes this in his Time magazine piece, “Toward the end, with the assault team moving from room to room, McRaven stepped unexpectedly away from the screen. An unnerving silence descended as the camera stayed on the admiral’s empty chair, his habitual yellow can of Rip It energy drink in the foreground. Then McRaven swung back into the picture. “I want to confirm we have a call of ‘Geronimo EKIA,'” he said evenly.

And then it was over. Bin Laden was now the “enemy killed in action” and in the hands of America. U.S. commander in Afghanistan, General David Petraeus pumped his fist and there was a feeling of closure.

In my next blog we’ll look at mindfulness and consciousness during an average day. Thanks for joining me.